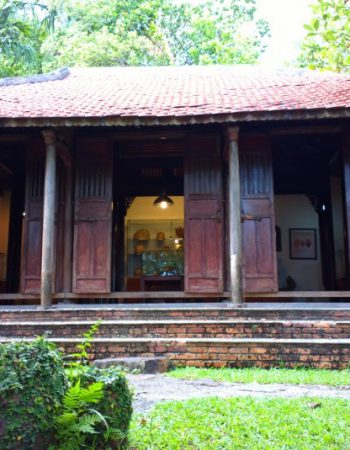 Here visitors can come to relax, rest and admire the world of forests, trees and grass. Being taken care of quite harmoniously between architectural functions and ecological functions.

The museum follows a model of the Quang Trung garden area. With fruit trees and green grass. Around the garden are arranged small paths of paving stone. Giving visitors a relaxing feeling like being back to their own childhood garden. The project owner tried to create and named it “Dong Dinh Museum – a garden of memories”.

That memory is rediscovered by the image of the family tree. A coconut tree often grows in Son Tra nature reserve. Perhaps the owner of this place has named its museum. A rocky forest garden for groups of friends or family after visiting the museum. Create a relaxing space to rest and listen to the wind of leaves and the song of wild birds.

There are four aquariums scattered in the garden to create a cool effect for the garden.

About the display of the collections include:

A modern architectural house utilizes forest ecological space to build on a gentle hill. This unique architecture has been highly appreciated by ecologists, architects at home and abroad to appreciate its expressive ability. This is a work used for displaying artworks. In the immediate future is a collection of paintings by two artists Dinh Y Nhi and Dang Viet Trieu.

This house is also a rotating place for works of art by other authors.

In addition, the auxiliary architectures of the project owner and manager also exhibit a quite unique ethnographic collection of ethnic minorities in the Central – Highlands region. These artifacts are worth noting because in addition to their discoveries, they also harmonize with the forest space around Son Tra Nature Reserve.

Come here, return to your childhood memories and enjoy the fresh air!